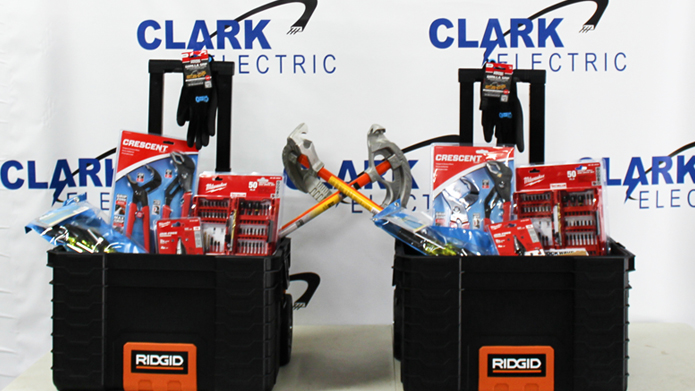 ST. PETERSBURG, FLORIDA, April 27, 2018 – Clark Electric announced the “Plug Awards” at the Kick-Off meeting in January, 2018. The Plug Award was created for the employees of Clark Electric to nominate each other for exemplifying our core values: Accountability, Trust, Safety, Quality, and Culture. Employees receive a small sticker with the core value on it to place on their hard hat. Each core value sticker that an employee receives to showcase on their hard hat represents that employee being “plugged in” to the values of Clark Electric. The first quarter nominations were sent in from company peers within the field and the office. Once every quarter the forms will be reviewed by the office staff and Plug Award stickers as well as certificates will be given out to each employee who was nominated for a Plug Award. There will be a drawing every quarter for a prize. To be entered into the drawing, you must have either nominated an employee for a Plug Award or have been a nominee for a Plug Award.

Employee of the Year:

To be eligible for the Employee of the Year Award, the employee must have received a nomination for each of the five core values as well as received the most nominations throughout the respective year.

If there is more than one employee with a nomination for each of the five core values as well as the same number of nominations throughout the year, the Foreman will review each employee’s nominations and make the final decision.

Clark Electric is one of the fastest growing electrical companies in Florida. Through our dedicated team of professionals, and partnering with the industry’s leading manufacturers, and distributors Clark Electric provides guidance from commencement of each project until the very last light is turned on. Each of our projects begin with our pre-construction department providing all necessary tools for estimating, budgeting, design-assist and planning of your project. Throughout each of our enterprises, our dedicated project management team is committed to assisting our clients and ensuring Clark Electric gives you the power to succeed.

Founded in 2009, Clark Electric is a State Certified Electrical Contractor based in St. Petersburg, FL. We emphasize focus on three main operating departments: Commercial, Residential and Service. Our focus is on safety and providing continuous customer satisfaction.

Team Clark was a rock solid Electrical Contractor and is gladly welcomed on any of the projects I am in charge of.
DANNY NEWMAN, Superintendent J. Raymond Construction
It's rare to find a company that has both a strong management team and field staff. Clark Electric checks both boxes.
TOM BURKET, Sr. Vice President PJ Callaghan Construction
Clark Electric knows how to complete a project on time through a tight schedule. Their professionalism, teamwork and safety program is an asset to any contractor.
RICHARD GARY, Superintendent Turner Construction
Clark Electric’s service and workmanship at Lucky's Market (Sarasota) was second to none. Their commitment to building relationships and working as a team player is invaluable to any project. We look forward to many future projects with these guys!
ADAM SPIEWAK, Project Manager J. Raymond Construction
Having Clark Electric as our electrical contractor during our build out turned into a blessing. All the staff at CEF were very courteous, clean, and professional. After the build out, I continued to use CEF as our service electrician here at Davidoff Tampa. Pricing is always great, and work is done safely, clean, and by code. Whenever I put a call in, the work is done right away no matter how busy they are.
Tommy DeAddio, General Manager Davidoff of Geneva Tampa
Clark Electric has been able to consistently bid, negotiate in good faith and most importantly, intelligently execute projects within budget.
ALBERT VALIN, President Valin Construction
Clark Electric is a valued partner and our go to commercial electrical contractor in the West Central Florida region. Their responsiveness and fairness during the typical construction challenges is what sets them apart from the pack.
BOBBY QUINN, President QuinnCo Construction
Clark Electric did an outstanding job on the Lucky’s Market project in Clermont, FL. It refreshing to have a contractor that is part of the solution and not the problem.
Matt Murray, Superintendent J. Raymond Construction
Clark Electric was responsive to the Owner’s needs and worked throughout the project in a responsive and collaborative manner. Clark stayed on schedule and exceeded expectations with milestones and provided solutions to the challenges faced on a complicated project with 60,000SF of hidden challenges. Clark Electric made a significant contribution to the overall success on the project.
Jeff Kleffman, President Able Construction
The Jerry Ulm Dodge dealership project had a very challenging schedule and scope of work, however Clark Electric’s commitment and resilience throughout made it a very successful project.
Gus Pardo, Senior Project Manager Creative Contractors, Inc